Muscle mass loss in endurance athletes over the decades 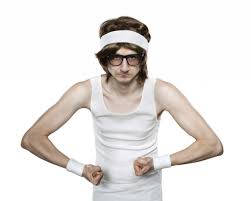 A few year’s back, on the verge of my 40th birthday, I had a memorable conversation with a masters athlete as we were jogging around the track together. He asked “How old are you?”, “39” I replied. To which his reply struck a palpable sense of fear…

As a lifelong bodyfat ‘single percenter’, I’m sure my heart rate file took a turn upwards on hearing this news :-) Fortunately, I can say now that he was wrong. But not entirely so. My body definitely did change as I headed into my 40’s. Just not in the direction he was suggesting…

One of the ‘perks’ of being an ex phys undergrad is that you get poked and prodded beyond all reasonable measure! Muscle biopsy needed for fiber typing? Ridiculous protocol in the heat chamber? Sounds like a job for the undergrad! :-) The extent of data that I have on my own physiology from my early 20’s would impress any lab rat! And, as I was cleaning off my bookshelf at the end of last year, I came across some of the results of these old tests in the form of some old lab workbooks from my ex phys undergrad, almost a quarter century ago…

Looking over some of my old numbers was interesting and surprising. And maybe the biggest surprise of all? I had forgotten just how big I was back then!

It’s funny how your memory of your own body type gets skewed over time. In my mind, I have always been skinny and on the low end of muscle mass. Side-story: Even back in those days I was the guy who was selected for surface anatomy demo's because most of my bony landmarks were visible through the skin :-) And, relative to my peers, this has always been true. What I didn’t realize is that as my peer group changed (from swimming to triathlon), my absolute 'skinniness' also changed..a lot.

As I looked back through some of the anthropometry & somatotyping workshops, I was blown away to see that I weighed 88.5kg (compared to recent weight of ~74kg) and while a little ‘chunkier’ than I currently am @ 9.8% vs 6.4% bodyfat (the University cafeteria had some awesome donuts! :-), a good portion of that 88kg was lean mass! Admittedly, at 195cm, I was still hardly Schwarzenegger-esque back then, but, in relative terms, still a very significant shift! I couldn’t resist throwing these numbers into my Somatotype calculator to get a visual representation of the changes over the past 2+ decades. Needless to say, that the distance between the points was a little more pronounced than what my memory might suggest…

A loss of almost 11 kilograms of lean mass over the course of the past 2 decades! And, furthermore, a distinct departure from the ‘athletic quadrant’ of the somatotype triangle!

And it would seem that this rate in loss of muscle mass as I moved beyond my 30th year isn’t too atypical:

The following meta-analysis on rates of “Sarcopenia, dynapenia and the impact of advancing age on human muscle size and strength” found a similar average rate of loss of ~5% lean mass per decade.

As the studies show, we humans can expect an ~3-6% (~2-5kg) drop in lean mass each decade after our 30’s. This loss increases over each decade to close to 10% (~5-7kg) by your 70’s. These numbers obviously represent the average (across the population) loss and, as an endurance athlete, I was a little surprised to see that my own rates (~5.5 kg/decade) are actually on the high end of this.

I shouldn’t be surprised though….

As endurance athletes, training at high volumes, just keeping up with the energy demands to maintain the training can be a tough ask! Additionally, the type of training that we do isn’t often muscularly sufficient to maintain mass. This has been shown repeatedly in studies that looked at endurance athletes muscle mass as they aged e.g. Hawkins et al., (2003) who concluded that…

The point of all this, being (for the sake of your future self): All endurance athletes should strength train!

This is especially true for athletes over 30 and it becomes all the more true at every decade after that!

While many of my (non-ectomorphic) friends, like my track jogging buddy, may not ‘see’ the change in the overall numbers as much as me – as the muscle lost is replaced by (or even over-replaced by) fat, in the absence of some serious strength training, it is there.

I was, personally, very fortunate to have the positive influence of my good friend Gordo Byrn to at least attenuate the atrophy a little over the past decade. Our annual “Big Steel Challenge” strength month where we challenge ourselves to lift as many pounds as possible within the month had positive effect but clearly, as the years pass (and anabolic hormones decrease), one month of strength emphasis per year is not enough. In my own training, I will be incorporating more strength focus periods and, I will be more conscious of that with the athletes that I work with.

In summary, as an endurance athlete, you are not immune to muscle mass loss with age & (due to the energy demands) may be even more susceptible to it over the decades compared to the rest of the population. As my experience, and the studies show, even younger (30 something) serious endurance athletes training at high volumes aren’t immune to this muscle loss and, given that it’s a gradual ‘leak’ more than a ‘flood’ the potential is there to arrive a decade or 2 down the line, at a time when functional strength becomes more and more important, asking “where did my muscle go?”