Using Run Power to pace you to your fastest Ironman

As I watched this year's Ironman World Championships from Palani hill, there was a period when I got really hot, so I decided to sit on the curb for a bit (spectating is hard work! :-) From this prime position of 'foot-level', as I watched the athletes come by, one of the notable shifts compared to previous years was the number of athletes who had one of those little Stryd Run Power Meters attached to them.

Stryd’s presence in Kona was noticeable and I was happy to attend a panel hosted by the one and only Bob Babbitt to hear more about the developing world of running power. Jim Vance (red hat), in particular is a coach who knows the topic inside and out – someone who (literally) wrote the book on running with power :-)

In my own coaching practice, while I’ve had some athletes using the Stryd units for some time now, I haven’t (as yet) got to the point of doing a lot of run workout prescription in power terms or, for that matter, requiring athletes to have a run power-meter (as I do for the bike). However, I'm rapidly getting to that point as I'm starting to really see their value, especially in one very important domain – race pacing

I’ve long been an advocate of ‘energy pacing your Ironman’, i.e. putting out the most energy in the sections of the race where air speeds are the lowest and you get the most speed 'bang' for each energy 'buck'. Specifically, hills & tail/crosswinds on the bike and, much more significantly, the entirety of the run. However, until run power meters came on the scene, it was tough to really quantify this bike v run output. Heart rate is a decent starting point, i.e. I always want to see higher HR’s in the run vs the bike. However, due to cardiac drift, even this doesn’t necessarily mean the athlete is achieving the objective of actually putting out more mechanical power on the run. Run power meters, obviously, provide a better way to quantify this bike v run mechanical output....

Beyond providing a number that accounts for hills, wind etc, by bringing the whole race down to a common unit of watts, run power meters encourage a different mind-set for racing. Rather than seeing the race as a separate swim + bike + run, athletes can now look at it as one single 8-17 hour energy allocation task. Which, from a physiological standpoint, is a much more accurate way of looking at the demands of the Ironman race.

I've even gone a step further when analyzing race files for athletes with both bike and run power, by coding a little script to actually merge the files into one so that I can look at the total power output over the whole race (shown below with bike in black and run in green for one of the few age-group athletes to go sub 3 - via a 272W run - on the Kona course). 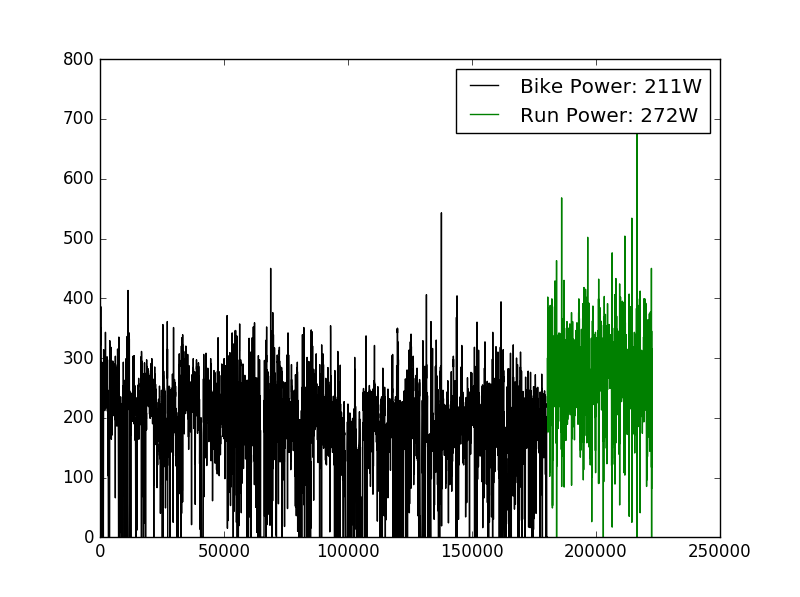 You can see, in the chart above, that (optimal) *big* lift in output as the athlete gets off the bike and moves to the lowest air speed portion of the course - the run. You can also see that the power actually rises mid-way through the run in the toughest section of the course. This sort of artful pacing profile is so beautiful and rare, it's almost worthy of framing! (Don't put it past me :-)

I find this to be a much better way to assess pacing and, especially to assess whether the athlete ‘over-biked’ relative to their total race output. An impressive bike file looks a little less impressive if it trails off into a 100W walk for the run! :-)

And consistently I find that athletes who have 'good' races, i.e. races to plan/races in line with the fitness that the athlete takes in, consistently exhibit this 'negative split' pattern, where the green section of their chart is higher than the black, i.e. they put out more watts on the run than the bike. This doesn't always mean that they are 'uber-fast' on the run. Larger athletes who negative split by power will still tend to have more impressive splits on the bike v run but overall, their cumulative times (& places) will be optimal for them. Also, (given the rarity of this type of pacing) usually among the top of the field!

It is all too common (even at the Pro level) for very (whole body) aerobically fit athletes who bike very strong but don’t run as well to conclude that they ‘need to work their run’. However, when looking at output over the day, it is more often the case that their 'green was just lower than their black' and poor pacing is the limiter. Ultimately, they just need to allocate the energy they bring to the event a little differently so that they have 'enough in the tank' to exert their normal, everyday, output on the run!

While we don’t have direct access to Patrick’s files, given the conditions this year, coupled with the fact that Lange was able to make good use of Andreas Dreitz through the bike, My power calculator would estimate a bike output of somewhere around 263W. Cam Wurf, on the other hand, does post his files and, as someone who was by himself for much of the bike, his actual numbers line up quite well with my estimate….

His normalized power from Strava was 303W – 3W lower than my calculator’s estimate of 306W. Which would account for some of those periods early in the race where he did have some cover as he was working his way up the road etc.

Now, looking at predicted output from my run power calculator for the 2, the situation changes quite a bit…

If we average bike and run over the whole race, we get 287W for Cam and 268W for Patrick. But clearly a very different distribution of effort….

And.. with very different results! Of course, Cam is a slightly bigger athlete so it’s tough to compare directly but, even in a watts per kilo sense, while Patrick's overall strength begins to show (with an estimated overall [bike+run] average of 4.26 w/kg vs Cameron's 4.02), the distribution pattern is similar, with Patrick electing to save his ~4.3w/kg effort for the run, while Cameron spent his on the bike...

Now, just for fun, let’s play the hypothetical game and flip those outputs, i.e plug Cam's actual bike watts into the run calculator to see what sort of marathon time that same level of output would have amounted to and vice-versa for the bike....

303W on the Kona run at 71kg (4.3 w/kg) is a ~2:45 marathon. Just a little slower than Patrick. To add some validity to this estimation, the larger Matt Russell (~77kg) shared a run file showing 310W avg (4.0w/kg) for a very impressive 'big guy' run split of 2:55 on the Kona Course. The age-grouper I highlighted above showed a similar ~3.9 w/kg for his 2:58, i.e. a fairly linear ~3 min improvement in the run split for every 0.1 w/kg increase in run power (Note: this linear increase in speed for a given power increase is *not* present on the bike due to exponential increases in drag). So, how much would Cameron give up on the bike?

A 268W bike for Cameron, assuming similar conditions to this year should yield a bike in the 4:21-4:26 range depending on what sort of company he found himself with (& since company is a lot easier to come by in those time frames probably closer to the 4:21 side of things! :-). For comparison, David McNamee went 4:21/2:46 using this exact (very smart!) strategy for 3rd.

But isn’t there more to it than that? Surely with Cam’s bike strength, he should ‘make hay while the sun shines’ and make use of that? But maybe we look at it another way, for someone with Cam’s pedigree on the bike, just how easy would a 270W effort feel? To go ~35W less than this year’s race & still finish with the lead group. How would those legs feel getting off the bike with the lead pack after pedaling at or maybe even under your aerobic threshold for 4 hours? In that set-up, just how close to their open marathon pace could an athlete go? I guess there’s only one way to find out…